Defending champions Germany made a disastrous start to their bid to win back-to-back World Cups with a shock defeat by Mexico.

Hirving Lozano’s first-half goal was the difference between the two sides in an enthralling encounter in Moscow, but the surprising result was not the only concern for Germany coach Joachim Low.

His disjointed side looked extraordinarily vulnerable on the break even before Javier Hernandez punished them with the pass that set up Lozano to cut inside and fire home.

Toni Kroos almost replied instantly with a free-kick but Guillermo Ochoa tipped it on to the bar and that was the closest Germany came to an equaliser.

Despite facing some sustained late pressure, Mexico held on to inflict a first World Cup defeat on Die Mannschaft since they lost to Spain in the 2010 semi-final.

This was also the first time a German side had lost their opening game of this tournament since 1982, when West Germany were upset by Algeria.

It could turn out to be a damaging defeat too. Although Germany will still be expected to beat Sweden and South Korea and progress, the runner-up in Group F will face a last-16 tie against the Group E winner, expected to be Brazil.

Low’s side had come into the tournament on the back of some unconvincing displays and results in their recent friendlies, but there had been no sign of panic in their camp.

Things were very different at a noisy Luzhniki Stadium, with Germany showing little of the composure or class we associate with them at major finals.

Even before they went behind, they were often over-run in midfield, with Kroos and Sami Khedira unable to offer their defence any protection from Mexico’s rapid counter-attacks.

Germany’s right flank seemed susceptible on the break, with Joshua Kimmich’s forays forward leaving space for Lozano and Hernandez to gallop into unchallenged.

If ‘El Tri’ had made more of their chances, or found a better final ball, then they could have been two or three goals ahead by half-time.

At the other end, Germany were also unconvincing in the early stages, with their famed midfield machine struggling to find a way through Mexico’s determined defence.

Although they improved in the second half, and dominated possession, Germany’s finishing touch eluded them and Mexico continued to cause problems on the counter.

Germany’s sheer desperation to equalise was evident by the number of men they threw forward late on, including, at one stage, goalkeeper Manuel Neuer.

It left them even more exposed in midfield and at the back in the closing stages, and Mexico might have punished them further. In the end, though, one goal was

Mexico had only won one of their past 11 meetings with Germany and their most recent ended in a 4-1 defeat by what was virtually Low’s B team at last year’s Confederations Cup.

But they fully deserved this victory, which brought huge celebrations from their thousands of fans who had travelled to Moscow, many in typically colourful costumes.

The intensity of Mexico’s play was matched by their supporters, who not only out-numbered their Germany counterparts, but also out-sung them. That was not the only reason Germany looked rattled, but it certainly helped.

Lozano’s pace and willing to drive at Germany’s defence was the highlight of the first half, with only a last-ditch Jerome Boateng block denying him in the first minute and setting the pattern for the early stages.

The second half was more of a demonstration of Mexico’s defensive capabilities, especially near the end – but they survived.

Mexico arrived in Russia with the hope of finally managing a ‘quinto partido’ or fifth match, after losing in the last 16 at the past six World Cups.

Juan Carlos Osorio’s side have a lot more work to do before they achieve that aim, but his famed attention to detail paid off here and they appear strong both technically and tactically. They will be tough to beat.

Mexico coach Juan Carlos Osorio: “In the first half, we were the better team. In the second half, they tried to attack more. We prepared yesterday for their use of Mario Gomez up front. We practised defending with four midfielders and three players up front and that is almost how we got the second goal.

“We showed we have a bright future and I am very satisfied with what we did. We played with bravery when it was needed and also defended with all of our hearts.”

Germany coach Joachim Low: “In the first half, we played very badly. We were not able to impose our usual way of playing, attacking, and there were lots of counter-attacks against us and we were very vulnerable.

“In the second half, we were able to press more, but Mexico drew back and then carried the ball forward fast. We had a couple of shouts, but it seemed jinxed and the ball did not go into the goal. Everybody is really unhappy and crestfallen but we have to put this behind us. Our team has experience of losses.” 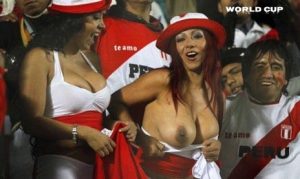 Video: Breasts for anyone as they celebrated Crotia win

Video :Trying to abort from outside