” I didn’t know the MDCT Bulawayo deputy mayor Banda and other thugs who terrorised MDC Khupes last week are zanupf thugs including the vanguards who almost burnt her and Mwonzora in a hut at Tsvangirai’s funeral .Ndakasara .

Shame .Mukore uno muchikunyepa kuti some will be wearing mdct tshirts despite all the evidence .Sorry maningi . Ask me why I composed the songs 6na9 and mabhinya in 2010 and we are in 2018 .Lying and blaming your opponents for the violence they are not causing will continue to destroy your reputation and the reputation of your party .

I guess you are so lucky to be pursuing your politics in our sithole Africa .In Western diaspora that you envy one simple lie even about the food you eat unooneswa moto. Makagarika shuwa kuAfrica.You get away with all sorts of bad behaviours and lies and people still vote for you to lead them.Lucky you.I guess that’s why we end up with bad quality leaders. ” Said sisi Vee.

Meanwhile, Turmoil in Zimbabwe opposition turns violent ahead of elections

Opposing factions within Zimbabwe’s opposition party were drawn into violent clashes over who will succeed the party’s founding president Morgan Tsvangirai, who died last month.

At least fifteen members of the Movement for Democratic Change (MDC) were left bloodied and injured, with some treated in hospital, after rows between backers of the current vice president Thokozani Khupe and rival Nelson Chamisa.

The clashes are the latest within the MDC as it is supposed to be gearing up for July elections, the first since the fall of Robert Mugabe last year.

The simmering violence first broke out when Mrs Khupe, who has refused to become involved in a coaltion of opposition parties against the ruling Zanu-PF, was first attacked at Mr Tsvangirai’s funeral at his rural home about 130 miles south of Harare.

Mrs Khupe maintains she is the leader of the MDC until it holds an electoral congress. But she has little support beyond a small group in Bulawayo, Zimbabwe’s second city.

The massively popular Nelson Chamisa has the support of the the younger generation MDC members, and says he will stand as the presidential candidate for an alliance of opposition parties, largely dominated by the MDC, which has been fighting elections against Zanu-PF since 2000.

Mr Tsvangirai made it clear to loyalists before he died, that he recognised that Mr Chamisa, 40, should succeed him.  His death followed a soft coup that brought an end to Mr Mugabe’s grip over Zimbabwe.

Tendai Biti, a founder member of parliament for the opposition MDC and finance minister in the previous government  with Zanu-PF, dismissed the recent violence: “We are a violent society. That’s what we know.”

Mr Biti is now a leading member of the MDC alliance trying to attract opposition political organisations into a united front against Zanu-PF in the presidential, parliamentary, senate and local government elections in July.

Mrs Khupe told reporters in Bulawayo: “It is a sad reality that some of our party members have resorted to violence for the love of power. We have argued that those who want to lead must subject themselves to a congress. They have refused because they know they will lose.”

But one of her opponents within the MDC who asked not to be named said that Mrs Khupe was a “divisive figure for years and years”. They added: “She knows there is no time for a congress ahead of elections in July. She also knows she can never win against Chamisa. Many of us have long been ashamed of Mrs Khupe.”

David Coltart, a founding member of the MDC and a former education minister in Zimbabwe’s inclusive government said: “The violence yesterday [Sunday] in Buylawayo was worryiing and unacceptable. If it is not stamped out quickly it will mean that the MDC is indistinguishable from Zanu-PF in the minds of the electorate.” 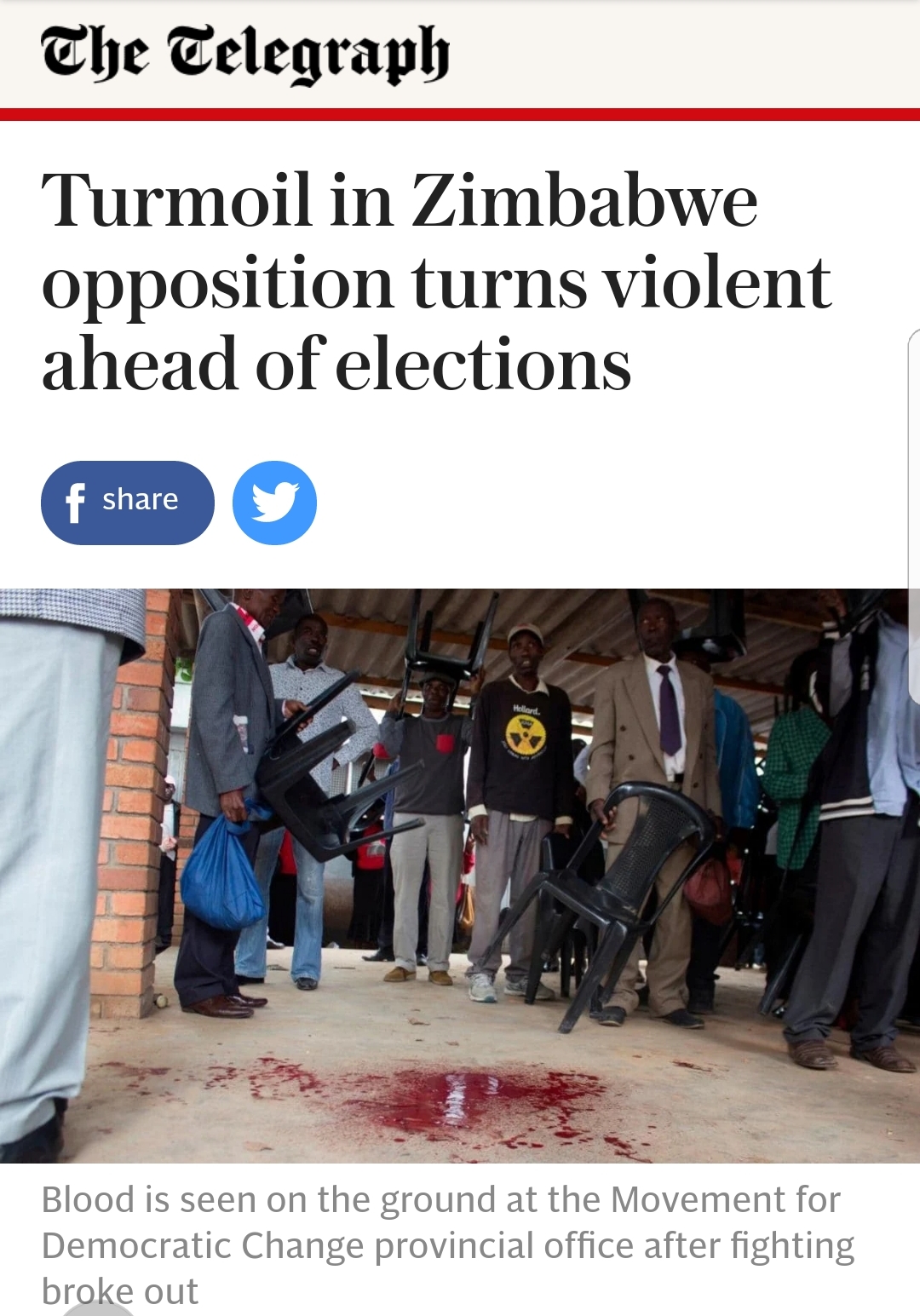